Threepenny Opera at a cinema near you.

Home / News / Default / Threepenny Opera at a cinema near you.

Threepenny Opera, is a brilliant show being shown at a cinema near you. In addition how can we not share the news when one of our very own Agents for Change, Jamie Beddard (New Wolsey Theatre, Ipswich), is staring in the show?! So here is how it works and a link on how to find the cinema near you.

How they do it

Though each broadcast is filmed in front of a live audience in the theatre, cameras are carefully positioned throughout the auditorium to ensure that cinema audiences get the ‘best seat in the house’ view of each production. Where these cameras are placed is different for each broadcast, to make sure that cinema audiences enjoy the best possible experience every time. 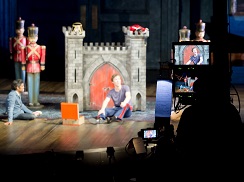 Satellites allow the productions to be broadcast live to cinemas throughout the UK, as well as many European venues. Other venues view the broadcasts ‘as live’ according to their time zone, or at a later date.

Here is the link to find a cinema near you