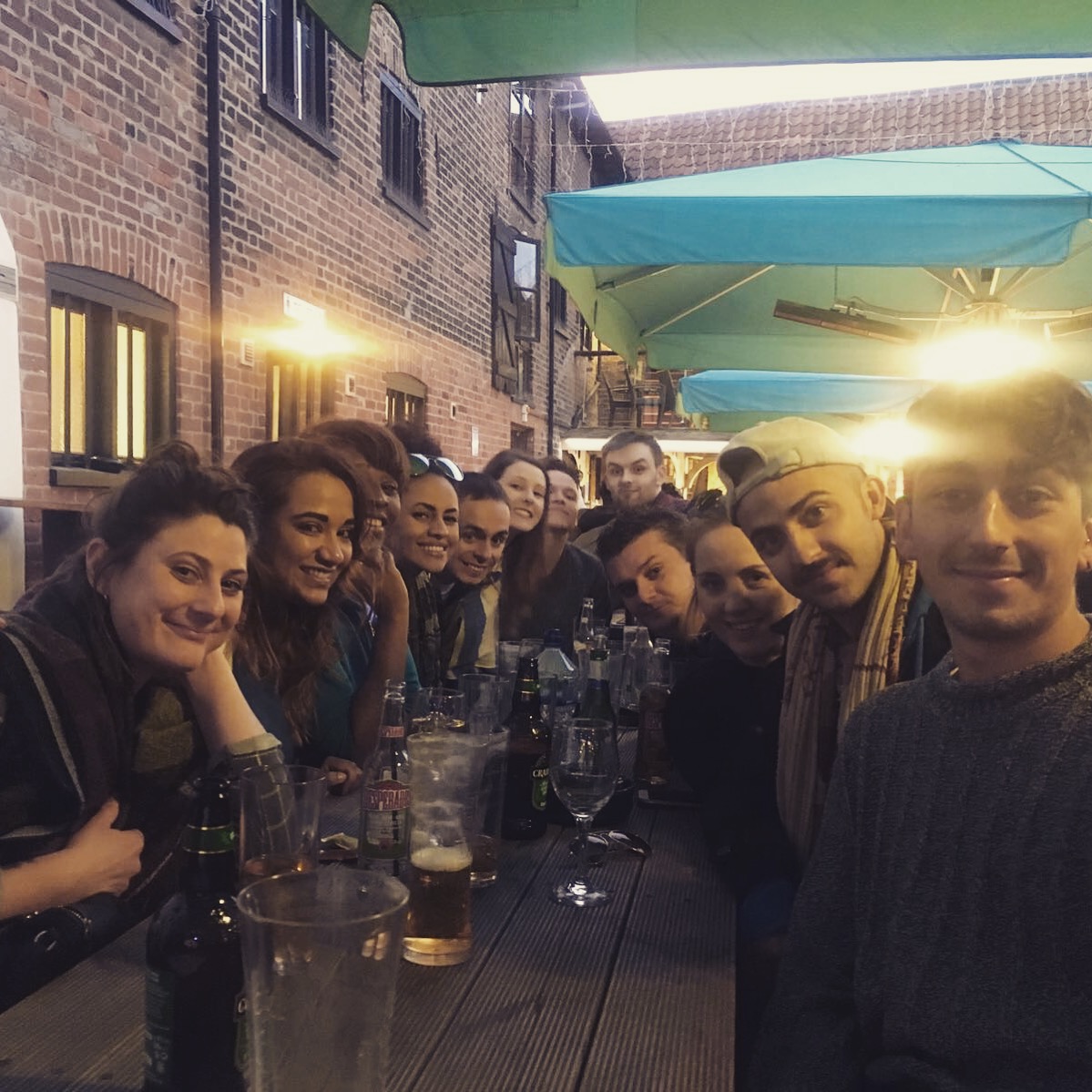 It’s our final week at the New Wolsey in sunny ‘Switch’, where has the time gone?  Brace yourselves people, because, of course, we went out in style!

Sunday saw the majority of the company staying up in Ipswich to enjoy the glorious sunshine and have an exceptionally well deserved rest.  This involved many trotting off to the beautiful Suffolk coast for a cheeky BBQ on Southwold beach.  A few others stuck to the local sights and enjoyed  day by the Ipswich Marina sipping on our ‘orange juices’ and following the live feed on the internet from the Olivier Awards where the very first EVER Ramps On The Moo’ production The Government Inspector was in the running for the ‘Outstanding Achievement in Affiliate Theatre’ award.  We did don some slightly sad faces when they didn’t win but were equally pleased for Rotterdam at the Trafalgar Studios 2 who did in fact scoop the statue.  Maybe next year eh folks?!  (Hint Hint!). Anyhow, we all joined up later on for a lovely company brew in Isaac’s to have a little chinwag, and play with Lukus’ (Cousin Kevin’s) wonderful pooch Kiera. Julian and I discovered a retro ‘PacMan’ arcade machine and were henceforth occupied for the evening and we established that in this particular watering hole: men and women are depicted on the toilet signs as ‘Football’ and ‘Shopping’… thank goodness somebody had figured out just how to avoid out such confusion!  Sigh.

Monday was a particularly important day for Ramps as the New Wolsey hosted a Ramps On The Moon pre-show discussion in the auditorium chaired by the fabulous Michele Taylor, Director for Change for the project.  She was joined on the panel by Sarah Holmes (Chief Exec at the New Wolsey), Paul Sirett (Writer and Dramaturg for Tommy), Jenny Sealey (Artistic Director of Graeae Theatre Co) and Kiruna Stammell (Actress in The Government Inspector)… what a crew!  The discussion was very well attended and the ultimate objective was to chat about what Ramps want to achieve and how they are going to put that into action.  Exciting times guys, and it was amazing to see how many people were up for hearing and learning about it too…. progress!

On ‘Planet Tommy’ meanwhile, we were given a few notes from our Mr Director (Kerry Michael) who had popped along to see us last Friday… he must have REALLY missed us as he only left on Wednesday!!  We missed you too!  We did have a couple of gems to take on board however with his note to Matthew (Voice of Tommy), “Good screen synchro Matt and team…now do it with grace!”…and to William (Tommy) “Don’t make it easy for Becky (Nurse)”- challenge accepted!  Later that day Amy (Sally Simpson) found herself choking on a crisp and dramatically crying “this is it!!”…thankfully it wasn’t!  Alim (Frank) then went on stage and managed to poke himself in the eye during a particularly energetic piece of signing… at least William was amused!  Thankfully Anthony (Rev Simpson) was next to him looking especially handsome – we now know this was due to the handy ‘make up artistry’ of Hearns’ (Ensemble)! MAC counter look out… you’ve got competition!

Tuesday was a very civilised one as a few of us (myself, Alim and Julian) pottered off to Suffolk Food Hall for a spot of cheese shopping.  It was right after this that Alim discovered that the reason he did not appear in any of the production photos was due to the fact that he had been photoshopped out… scandal!  I (Hawker) did my very best to tease the bits off him which is why it was particularly hilarious when we learned that the same thing had been done to me… ouch!

[Editor – wait until you see the trailer! All will be forgiven!]

Prior to the show we had a briefing from lovely Pete Rowe (Artistic Director at the New Wolsey) for the upcoming ‘Relaxed Performance’ which is essentially for people with Autism, Dementia and any who may find anything in the show a bit too erratic, loud or aggressive.  This is an amazing initiative that I am pleased to see it being implemented into many more theatres now… hooray!

On a silly note, Shekinah (glorious Voice of Mrs Walker) managed to throw a pint of water over herself, her costume, her phone and the rest of her stuff prior to going on stage… #butterfingers.  We all descended upon Ararat Turkish Restaurant (organised by Peter) following the show for our very first company meal (I’m sure the first of many). It was amazing and many a doggy bag was claimed – eyes too big for our bellies methinks!  However, I did fear that the place may get ruined as the restaurant staff attempted to bring chairs and tables from every floor they had…it was a slight calamity but we succeeded in the end.  Thank you Ararat…you are the BEST!  (Try the lamb hummus… its FIT!)  Upon his exit, Garry (Uncle Ernie) managed to part the tables just like Moses while singing ‘See Me, Feel Me’… always an opportunity!  Upon my exit, Peter (Acid Queen) saw it fit to describe myself and Natasha Julien (Dancer) as the ‘old’ and ‘new’ Natasha’s respectively… I hope that’s not going to stick!  Adam (Drummer) managed to leave his bag in the restaurant so Steve (Bass Guitar) picked it up and took it to the pub… he then forgot it in St Judes… doh!  In other news, Alim started his ‘scare cam’ trend by spectacularly terrifying Julian back at their digs and capturing it all on film. I have the evidence people – trust me, it’s good!

Wednesday, a two show day… ay ay!  So, the first was our Relaxed Performance where Matthew made everyone stifle their giggles with his quite wonderful dancing in the hippie commune.  Due to being a dresser down, the ‘Heroes For The Day Award’ went to Danuta (Team Wardrobe – who missed half of her husband’s birthday) and Crystal (Follow Spot) who stepped into the breach  and did a stupendous job!  All in all I think that the relaxed performance went down really well and we all had a glorious time chatting afterwards!  Following this we (Amy, Shekinah and myself) realised that the sole reason that Patricia (Company Manager) comes into our room is to steal our chocolate!!

That evening’s show was a busy one with a particularly fantastic audience, although Lukus (Cousin Kevin) had an interesting journey onto into ‘Christmas’ as he decided to trip on Shekinah’s belt on the way in!  Oh… and my costume was violated by Julian as I turned my back for two minutes only to give him the opportunity to look better in that sexy little tangerine number than I do… grrr!!

Busy busy Thursday… beginning with a ‘Pampering Morning’ at Ravishing Beauty salon where I was reassured by Ailsa (Amelia’s PA) that if I had grey finger nails and blue toes that I wouldn’t look like a dead body!  Cheers love!  Massages, manicures and pedicures were had and everyone emerged looking super-duper pretty.

We were right on time to arrive for the first ever #TommyTour Career Development Workshop where we convened to try out some ideas for potential future Ramps productions, led by Pete Rowe, Paul Sirett and Jamie Beddard.  (This was also where Steve showed up proving that he is the only person in Ipswich that would go to Greggs and buy porridge!). No spoilers but it created some pretty ‘zoo like’ antics and provided A LOT of noise!  Such fun!

That evening, Shekinah managed to epically ‘fly’ off the stage after ‘Smash The Mirror’ and land in the ‘Downward Dog’ position in the wings!  Impressive!  Amy earned the name of ‘Company Dyson’ for whizzing around and picking up stuff that people had dropped… goodness she’s talented that one!  I attempted to steal Hearns’ chair during the ‘stepping stone’ moment of ‘I’m free’…he wouldn’t let me… naughty!  Oh, and after the show, Matthew managed to cover Amy in her own drink by knocking it over with his salad kebab… RAW talent!

Friday daytime saw a few of us back at Ararat Restaurant for lunch where, following her complicated order Patricia asked the waiter “are you confused?”…”Yes” he was his reply…moral of the story…order less PD!  I then interviewed William and Donna (Mrs Walker) for part of Alim’s BSL Interpreting Qualification, and he was marvellous…good luck pal!  Meanwhile Rob (MD), Ali (DSM) and Rosie (ASM) enjoyed a blissful afternoon at Jimmy’s Farm (one of my favs) where they ate ALL they food and cuddled ALL the bunnies!  Lukus got all entrepreneurial and set up his own ‘cash and carry’ for company members to purchase his abundance of unworn attire. It was a success – we shall be dressed far better from now on and I love my new reindeer bobble hat… thanks Kev!  Alim, however, was struck by tough times however, where he desperately asked “Has anyone seen my water bottle? I’ve lost my Brita filter”…#firstworldproblems!  In show related stuff, shockingly, for the first time in #TommyTour history, Amy didn’t have anyone in the audience and Shekinah danced so hard in ‘Sensation’ that she salivated into her own eye!  Moment of the night had to go to Stacey (Mrs Simpson) with her epic percussion fail when she spun the ratchet so hard during ‘Tommy’s Holiday Camp’ that it flew apart, almost decapitating Max (Captain Walker) in the process! #winner

And onto Saturday where we celebrated two more company birthdays!  I KNOW!  The first for Rob and the second for Matthew (Monday) and we gave them the most harmonious and angelic version of the tune we could muster (I’m lying – it was woeful, but funny nonetheless!)  During the matinee, poor old Julian managed to contract a nasty bout of hiccups which proved interesting when the time came for him to play his French Horn in ‘Go To The Mirror’, Lukus took an alternative route onto the riser during ‘Sally Simpson’ and William almost missed his own bow laughing about it!  The truck arrived during the interval and I was particularly interested in its size (as I was parked right outside the dock doors). So I asked Amy “How big is the truck?”  She replied with “well, on a scale of one to truck…it’s a truck!”…noted…and wow! That evening Lukus accidentally (hmmm) stamped on William’s foot while bullying him (in the show!). Do not worry – William was not badly hurt during the process but boy, that Kevin is method!

So, it was the end of the Saturday evening show and the incredible full standing ovation left us all feeling very special and thankful for an unbelievably magical three weeks at the New Wolsey.  Always a lovely theatre and always a glorious audience. Let’s hope that the next 5 venues spoil us as much as you have!  So its goodbye to Ipswich (which means goodbye to Danuta’s positively sinful carrot cake) and hello to the Nottingham Playhouse – we can’t wait!  Huge thank you and praise to our amazing crew for the first ‘get out’, however, while you were all slogging away, Hearns was up to his old tricks again in St Judes, this time tipping drinks over Max – swings and roundabouts!

Anyhoo, join me next week for the Tommy news from the East Midlands. Woo hoo… we’re on tour! Bye…Tash xx