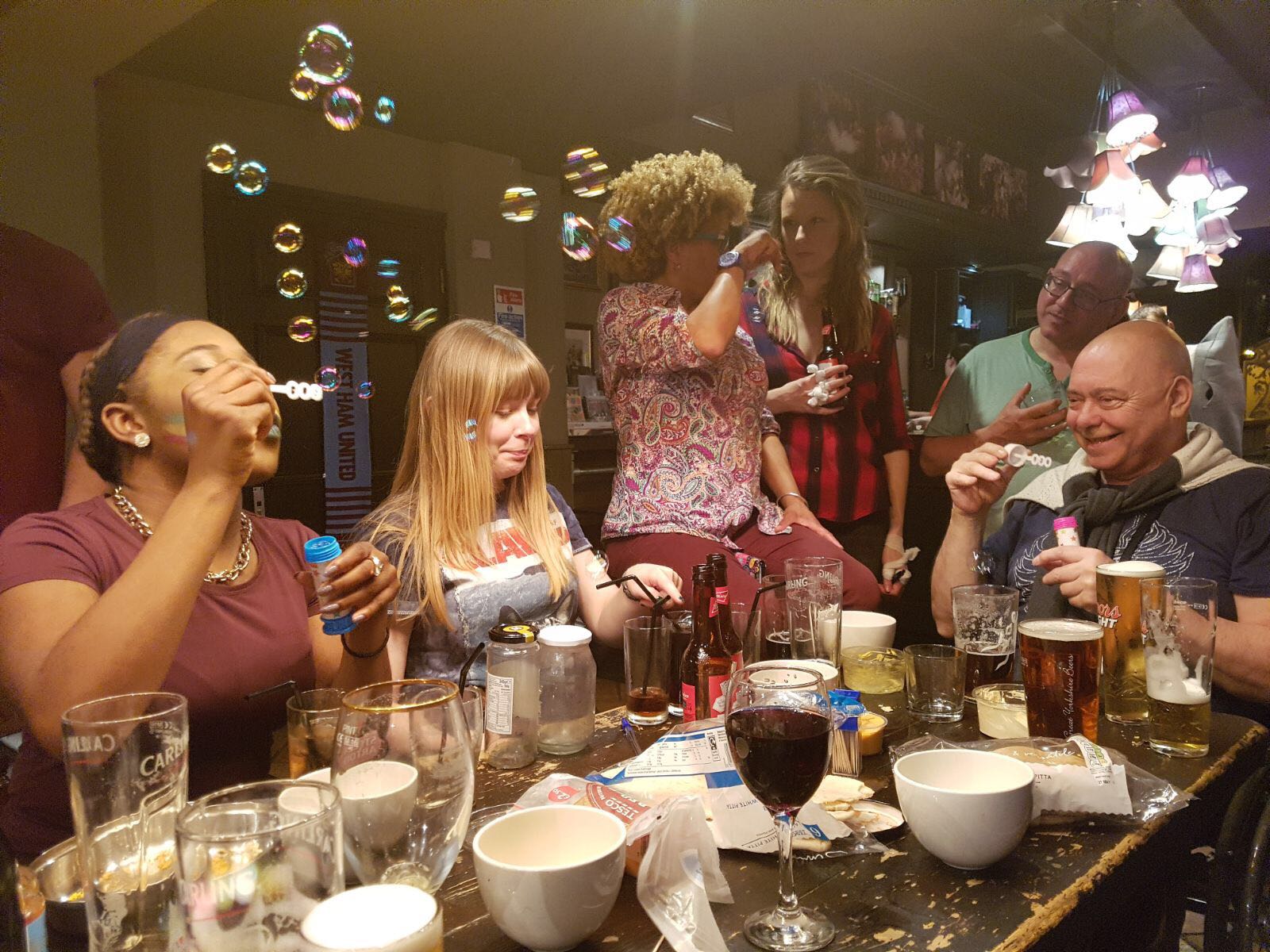 It was our second and final week at the fab Birmingham Rep so of course it involved lots of fun and antics to top off a fantastic fortnight of amazing audiences and brilliant shows.  The weather was definitely in our favour with glorious sunshine throughout the week which resulted in ‘Sunny G’ Garry (Uncle Ernie) donning a fabulous summer wardrobe and cultivating a pretty impressive tan and Peter Straker (Acid Queen) getting his sexy pins out in his lovely Capri pants!  I do love the summer!

So Monday saw us enjoying a welcome day off where we learned that poor Kirsty (Wardrobe Mistress) had been sharing her digs fridge with a tortoise… I suppose there are worse flat mates! Due to the lack of stimulating conversation she popped over to visit me and we enjoyed a lovely curry while we did a tonne of prep for Tuesday’s festivities which involved her making a cardboard shark hat from a cereal box following instructions on YouTube! So creative!  Others went down the more active route with Lukus (Cousin Kevin), William (Tommy) and Stacey (Mrs Simpson) taking a cheeky trip to Birmingham’s ‘Escape Live’ experience…. all in all, a successful day of rest!

By Tuesday, party planning was in full swing but not without a couple of mishaps! I sent a text to Nathan (Sound No 2) with a shopping list of party nibbles….I got a text back saying “I’m not going to Sainsbury’s”, I said “Go to Tesco then”, he said “No!” He then called me and I then realised that I had saved somebody else in my phone as ‘Nathan’ and had essentially asked a complete stranger to do my shopping… #fail!  We then headed into the theatre for a little rejig of the show which saw fabulous ‘Super Swing’ Becky (Newspaper Vendor) taking on a whole new role and doing a grand job… well done Becky!  During the show that night we were treated to a couple of joyous moments with Alim (Frank) falling off the wagon – literally – as he stacked it out of the golf buggy, Nathan (the real one) took a little trip in the wings resulting in him falling through a curtain backstage (he’s fine), and me (Hawker) taking an impromptu solo trombone note during ‘Extra Extra’… good thing it’s a subtle instrument, I’m sure nobody noticed!

So the big event rolled around after the show in the form of Steve’s (Bass Player/Winston Churchill) surprise West Ham/Jaws/Iron Maiden themed birthday party.  FYI, his special day is not till the 1st June but he was concerned that as it was in the week off nobody would remember – well we got you, really good! However, not before Adam (Drummer) almost managed to take him straight to the venue at the Prince of Wales before anyone had arrived or decorated! Thankfully Shekinah (Voice of Nora) was employed as decoy and took him away while doing the performance of the century so that we could set up our cheers and pineapple on sticks and shark paraphernalia!  Needless to say, it was a huge success, he was suitably surprised and slightly bewildered, and had a super fun night along with the company of Team Ipswich who happened to also be in Brum that eve.  There were also some sensational costumes, with Alim donning an iron, apron and a feather duster (Iron Maiden), William fully clad in a human sized shark suit and Donna (Nora), Amy (Sally Simpson) and Natasha Julien (Dancing Queen) coming in the full West Ham colours of claret and blue with ‘Romford 35’ on the back and Wiltshire ham stickers on their fronts… ‘A’ for effort guys! Connie (Team Wardrobe) and Steve then took it upon themselves to customise Anthony’s (Rev Simpson) brand new Iron Maiden T Shirt and made the poor lad stand topless in the pub while they did so… FYI, I did not mind at all!  Not one for wastage, Steve then used the arm they cut off as a bandanna and the topless theme continued throughout the rock and roll males of the company – it was a wonderful sight! Happiest Of Days for next Tuesday Steve, we love you!

On Wednesday, Donna and William saw themselves leading a workshop with a few aspiring deaf actors and they all had a hugely successful and entertaining afternoon.  We also enjoyed a fab Post Show Q & A session that evening where we had a truly insightful chat with the audience, who had been particularly incredible that night.  During the show however, naughty Max (Captain Walker) managed to scare Lukus right before Cousin Kevin, resulting in him letting out a brilliant squeal and me letting out a huge cackle!  Becky found herself at a loss at the ‘Christmas Table’ so took the time to inspect the empty half of a Xmas cracker for a whole verse and I might have forgotten something pretty important in the bow…. namely Amelia! Sorry hon, it won’t happen again… oh no wait!!  We then found ourselves in the lovely Olde Worlde ‘Tap & Spile’ for a cheeky lemonade where Anthony cashed in on the fruity after only putting in a pound and the rest of us had some fun with a roll of sellotape… we are adults I promise!

Thursday evening was a poignant one as it was our 50th performance of the show!!!! I cannot believe that has come about so quickly… what a joy!  We celebrated with Alim demonstrating some spectacular yodelling in the studio scene, some glorious sunbathing during the day and Peter demonstrating a pretty impressive accent masterclass during the Awards Ceremony! This was a great way to round up a pretty important day as earlier on Natasha J had organised the company to set off a whole bunch of pink balloons with messages on them outside the Rep as a mark of respect to those who were lost during the horrific attack on Manchester earlier in the week.  It was a really reflective and beautiful moment and gave us all a time to do something together in support of the people that needed it.

Friday was a good one for Rosie (ASM), Amelia (Specialist’s Assistant) and Ailsa (Amelia’s PA) as they finished their ’30 Day Fat Burn’ Workout programme… not that they needed it.. but well done guys, I’ll join you next time round!

Saturday, our final day in the Midlands where Donna tried to tell me she loved me using BSL and poked me in the eye, William and I shared some snails for lunch in Cafe Rouge, Max proved that he is officially sponsored by PieMinster as he’s been there every day for a fortnight and they now know him, Donna managed to throw cake everywhere in the dressing room (mucky lass) Shekinah let out a spectacular sneeze during the only silent part of the show and Amelia took her ‘Reflexologist’ role to the extreme when William failed to react to her by allowing the end of the hammer to fly off somewhere leaving her with just a little metal rod to poke him with… cue awkward staring at each other and anticlimactic retreat to behind the screen so she could have a little giggle and Super Julian (Voice of Tommy) did an incredible job at saving the day – strong work people, sounds like a pretty successful Saturday to me!

So it was the end to an absolutely fantastic fortnight at the Birmingham Rep, it’s always a pleasure. Such a great response to the show in a fabulous city, thank you so much for having us, it’s been a blast!

Join me next week when I shall be doing it a little bit differently (oooh!!) from the comfort of our……WEEK OFF!!! Steve will be at the 02 Arena with his beloved Iron Maiden, Shekinah will be back in the recording studio, Pickles will be on his allotment, Ali (DSM) will be raving for her birthday celebrations and I will be in my bed!!!