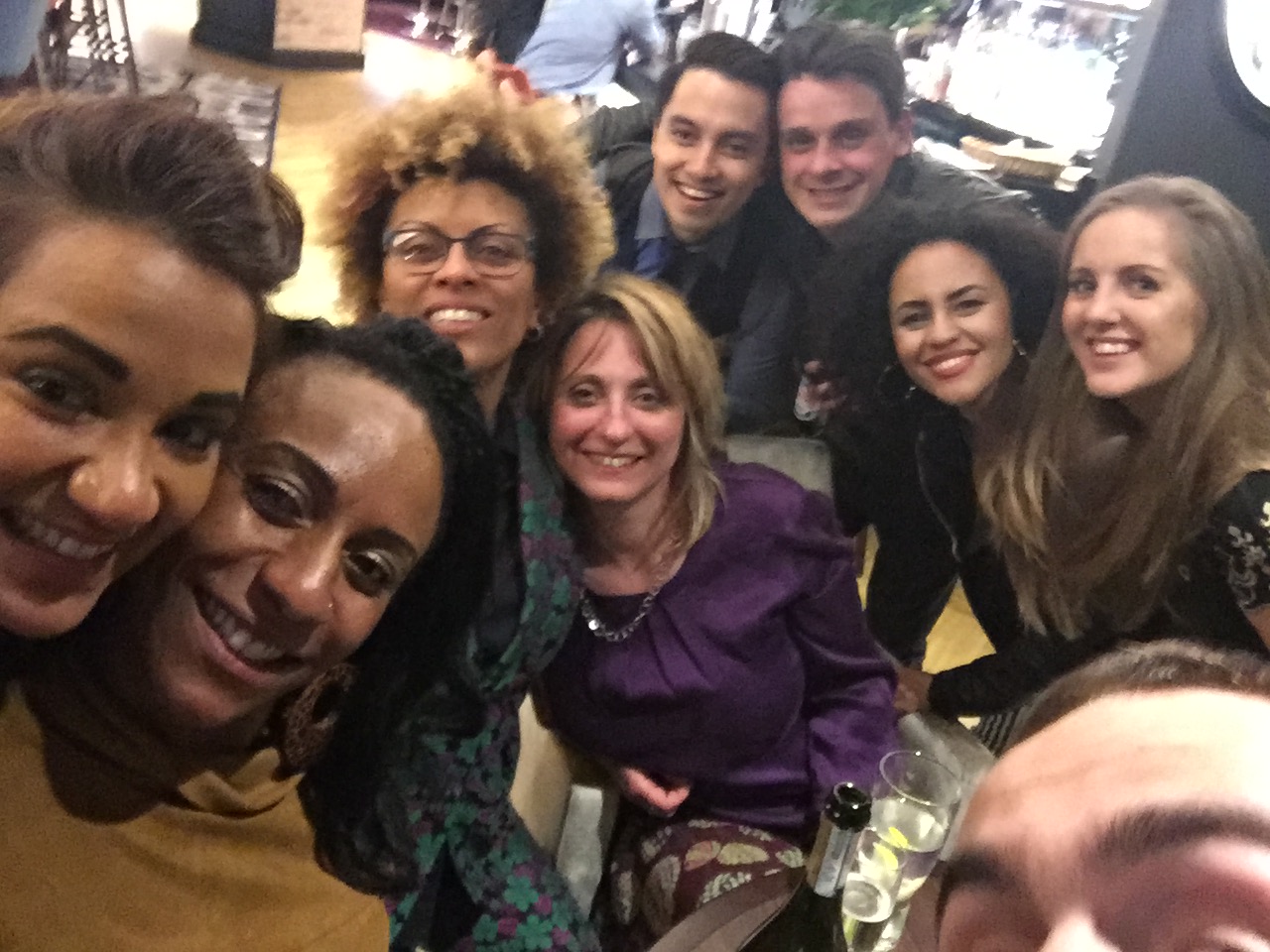 Can you believe it? This is Blog No 9 and we are already onto our second venue of the tour.  That’s right folks, this week saw the #TommyTour camp descending upon the land of Robin Hood… Nottingham!  However, this would never have been made possible without the exceptionally hard work of our crew who completed the get out in Ipswich at 5.30 on Sunday morning and had everything up and ready to go on Tuesday morning at the Nottingham Playhouse.  Hats off to you all you wonderful lot!

So, many of the company arrived in Nottingham on Monday ready to settle into our new home for the fortnight.  However, booking digs for Nottingham must have slipped lovely Adam’s (drummer) mind… it’s clearly so full of lots of other important stuff!  Luckily ‘someone’ was on hand to house the lad and you shall all be pleased to know that he shan’t be going homeless whilst in the East Midlands! #phew

Tuesday was our technical rehearsal day at the Playhouse and the lovely Stephanie Sirr (Chief Executive) kicked off proceedings by hosting a meet and greet on the stage for everyone to get acquainted and boy were there a lot of us!  Incredibly it was also a 5-Birthday day for us… one which belonging to our serene and demure Company Manager Patricia! 21 again?!  Happiest of Days PD!

We ploughed on with our rehearsals and it was quite an adjustment moving the show from the New Wolsey stage to the Playhouse as the spaces are so vastly different… but we managed, cos we’re awesome!  (I personally was quite thankful to not to negotiate the pillars in the upstage doorways anymore though!). We also saw the return of our creatives Kerry (Director), Nickie (Associate Director), Mark (Choreographer) and Super Sarah (Producer) who were on hand to make sure all was as seamless as possible.  It was fun though, explaining the concept of ‘flip’ and ‘flop’ (our names for the two main pieces of the set) to our new BSL interpreters who looked somewhat baffled. This was eloquently explained by Kerry who said “Anyone who flips and flops can flip and flop in this time now”… who’s lost?  Don’t worry ladies, you’ll get the hang of it!

The tech was not without plenty of mischief and mayhem backstage though beginning with naughty Adam beating Anthony (Rev Simpson) awake with a pillow whilst he tried to catch a couple of cheeky zzz’s on the Acid Queen’s bed… meanie!  Donna (Mrs Walker) choreographed her very own erotic routine to ‘Fiddle About’ and freaked out Stacey (Mrs Simpson) with her ‘tickly hands’!  She did not stop there though as she snuck up on Lukus (Cousin Kevin) to pinch his bum, he subsequently let out a high pitched yelp and fell on his bottom in surprise!  Of course Donna laughed at him and ran away!  This must have put poor Lukus slightly on edge as in ‘Sensation 2’ Shekinah (Voice of Nora) jumped out onto stage particularly energetically and he stacked it again!  You know what they say – if you fall over on a stage, you’ll work there again someday – looks like Kevin will be back here a lot then!

I (Hawker) had an entrance catastrophe at the beginning of ‘Welcome’ as I subtly dropped my Indian Bells during the one quiet bit of the show.  I was distracted by the fact that the haze was going nuts and lovely Emily (ASM) was completely engulfed in a sea of dry ice… this then set William (Tommy) and Amy (Sally) off as they giggled their way through their scene beautifully! (Better to get it out in rehearsals eh?)

After that long old day it was inevitable that we would all land in Browns across the road for an apple juice to celebrate our lovely new venue and of course, Patricia’s birthday, where Hearns (Ensemble) boldly went to the bar to order a Cosmopolitan just like James Bond…. errr, I’m pretty sure that was a Martini, but close!

Wednesday was dress rehearsal day and opening night.  This wasn’t the best start for Tony (Guitarist) as his trousers went AWOL but they were soon located and all was well. In other trouser related news, Julian (Voice of Tommy) was very perturbed that Matt (Other Voice of Tommy) had received a pair of new jeans and he hadn’t…. somebody get the kid some Levi’s, quick!  After all that wardrobe drama we all got stuck into our dress rehearsal which went pretty well.  However, Lukus did manage to trip into his Cousin Kevin scene (obvs) with Amy sympathetically stating “Poor, Lukus, I sometimes worry that he’s going to get hurt!”  Don’t worry, he was fine!  Meanwhile, William managed to walk into a flat backstage and Stacey did the beginning of Act 2 with only one frilly sock on.  This all bode well for the evening show where we were treated to an electric audience and full standing ovation at the end… thank you Nottingham!  Special mention to Connie (Wardrobe Assistant) who covered for Kirsty (Wardrobe Manager)… Connie you were fab, thank you!  After a day like that, we were all happy to have a cheeky soda water in the bar afterwards where we learned that Sarah was slightly flummoxed by the luxuriousness of the ‘crash pad’ she had booked for the night! #Brilliant

Thursday was our second Press Night of the run and we threw everything at the show that night and had a fab response.  This was probably down to Dance Captain Alim’s feisty warm up which saw us all catwalk strutting down the stage… hilarious!  We celebrated with a cheeky soirée in the bar complete with yummy burgers, which were a lovely addition to the beautiful ‘Tommy’ cake that Shekinah had made for us… thanks for the food peeps!  The party continued into the casino next door where we ate more food (FYI, the food’s really good in there) and Hearns had a cheeky flutter and did pretty well, William broke even and Nathan (Sound No 2) did not!  Great night had by all, especially lovely Ali (DSM) who was happily sat in the casino with her cup of builders tea and slice of ‘Tommy’ cake, and Julian, who ordered a platter of yummy stuff and declared “No, no, that’s not to share, that’s just for me!”  However, Alim did attempt to re-enact his catwalk strut from earlier wearing Amelia’s (Specialist’s Assistant) heels, only to split his trousers all the way up the back… #rampsontheMOON?! Hehehehe!

Friday saw Amy and myself doing a live interview on BBC Radio Nottingham where Amy told the East Midlands about her glorious tapas lunch.  We were then given a couple of notes during warm up from the creatives where Shekinah was asked to ‘calm down her drunk entrance’ and Becky (Vendor) and I were told, “in Sensation 2, please start apart, you look like Siamese twins!”  A duck whistle found its way into Tommy’s Holiday Camp that night, but it was a great one nonetheless… probs due to the ‘leg limbo’ competition in the interval between Donna and Amelia!  This was celebrated by a lovely curry in town later that night.

Saturday saw Alim (Frank) back to his naughty ‘scare cam’ antics, this time terrifying Becky and Matt independently.  We’re going to get you one day and it’s going to be great!  I managed to hit Lukus in the face with my trombone (sorry pal) and was later asked by someone if I was the ‘company mule’?… not quite sure what to make of that!  Oh, and Garry (Uncle Ernie) and Max (Capatin Walker) realised that they can only communicate with each other using ‘raspberry’ noises since the days of Dressing Room 4 in Ipswich… sophisticated stuff!

Phew! That was one heck of a week. Join me next week to see what our final week in Nottingham has had in store!  Bye…Tash xx