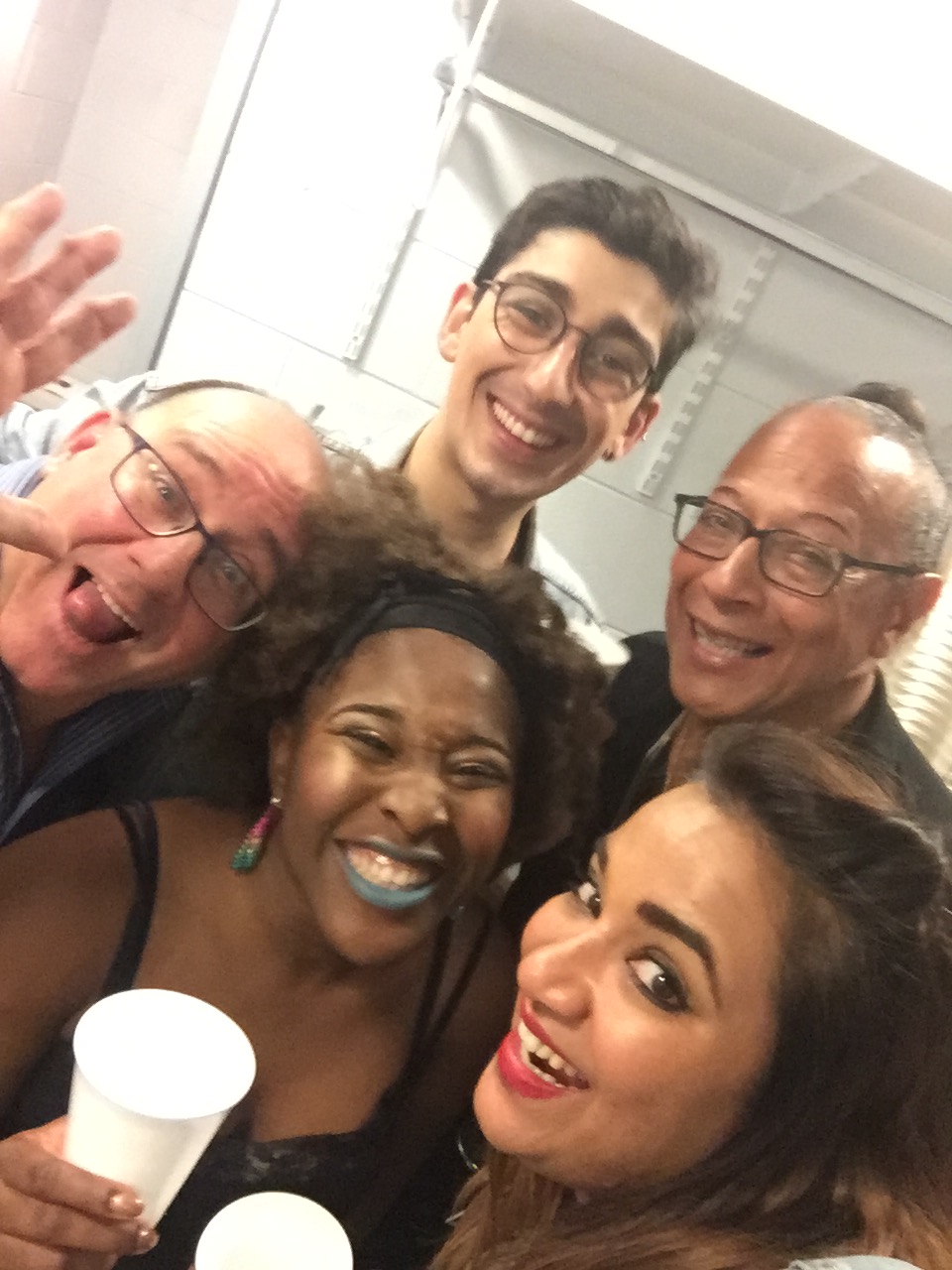 So it finally arrived…the last week of the amazing Tommy Tour, and what a week it was! As we rolled into the end of the tour at the Sheffield Crucible, emotions were high as were everybody’s spirits as we bid our final farewells to this incredible show.

This began on Sunday when a bunch of the Tommy gang headed off to the Peak District for a lovely walk and Sunday roast where they got their ‘5 mins of fame’ when they were recognised from the show on their cheeky little hike.  Sunday was also a particularly good day for me when Jeni Draper (BSL beauty) posted a picture on twitter of a batch of freshly baked chilli chocolate cookies…that could only mean one thing…I was getting cookies!

Monday saw Callum (Sound 1), Nathan (Sound 2), Simon and Tom (Team Tech) road tripping their way to Alton Towers for some drake devil fun whilst Connie (Team Wardrobe) bless her, was busy burning her tongue on her KFC baked beans…she’s fine btw!  Monday was also a bit of an epic night as we threw a ‘Tour Hen Do’ for our beautiful Kirsty (Wardrobe Manager) who is due to be wed this summer.  She was suitably surprised mainly due to the superb espionage from Connie and Shekinah (Voice of Nora) as we bustled her out of the house not suspecting a thing!  There was much tapas to be eaten, cocktails to be drunk and the highlight being the arrival of Steve (bass guitar) and Adam (drummer) dressed as their alter egos Elaine and Felicity…it was terrifying, I’m not going to lie!  They were ably assisted by William (Tommy) who was suitably stunning in a strapless canary yellow dress supplied by the artful Donna (Nora)…so impressive was his outfit that he was given a free shot on arrival for his attire alone! This is probably what a prompted Julian to quip “you can’t bottle and sell style!” True that, but this lad probably should!  Anyway, our ‘hen’ had a fabulous evening… mission accomplished!

Tuesday afternoon found many of the Tommy crew piling into Sheffield Cathedral to surprise Matthew (Voice of Tommy) as his short film ‘Gracie’ was coincidentally being screened that day.  It was beautiful, he’s a talented lad and we all were captivated… some even shed the odd tear!  This was followed by a final evaluation session with our super Michele Taylor (Director for Change ROTM) where we had a lovely chat…it’s so great to see that Ramps On The Moon really are all about learning and progress and I believe that’s why we have a product that is so strong.  Back on the stage for warm up, Steve was busy with three ladies trying to remove ‘Elaine’s’ nail varnish from the night before while I was way laid by the arrival of Jeni’s chilli chocolate cookies…babe, it was worth the wait…very happy Tash! (Even though Pickles, Garry’s PA tried to hide them in dressing room 3… naughty!)

Wednesday saw the arrival of the ‘fart gun’ in dressing room 3 where Garry (Uncle Ernie), Max (Captain Walker) and Pickles enjoyed much merriment – as did I – at the ridiculousness of the instrument!  We are adults your honour!  This afternoon was also our final relaxed performance of the run and it was a real joy, great audience and fab feedback, well done team!

Now Thursday was one that I think many of us will never forget as the man himself, Mr Pete Townshend of The Who trekked himself up to Sheffield to see our/his cheeky show.  We all met him afterwards and as a lovely touch he joined us on stage afterwards for our post-show talk which was probably far more than any audience member was expecting. He seemed truly pleased with what we had created and was an absolute gent – taking a billion pictures with us all and smiling in every single one!  Meanwhile, fab Sarah (New Wolsey Chief Executive) was given a security lanyard to wear which comically stated ‘pest control’…love it!  This was teamed with Garry meeting PT wearing a ‘Clash’ T-shirt and changing out of it and into a ‘The Who’ one only after the dude had gone – it was only moments after that he realised! Gorgeous Ali (DSM) must have been so excited that evening for our upcoming party that she announced that our call for Friday would be 8pm… hmmm… ok, I’ll go with that!  Luckily we had all spied the amazing ‘Tommy’ cake that had been supplied by Anne and Nick Snowden (Anthony’s folks) and we all got distracted by that!

So the party hosted by the gorgeous New Wolsey Theatre took place at the Grosvenor Casino in Sheffield.  Lots of food, plenty of orange juice and – drum roll please Adam -awards! Adam and I sat in all day trying to concoct some inventive ones and all in all I think they all went down swimmingly well.

And the winners were:

The ‘Tommy Can You Hear Me’ Award for best quote:  Patricia (Company Manager) in response to Rob (MD) Rob; “I had another thought but I just can’t find it” Patricia: “Would you like me to put a call out?”

The ‘Vague Haze of Delirium’ Award for things that just weren’t quite right: Hearns (Dancer) for believing that you could walk through the Sky Mirror water sculpture outside the theatre in Nottingham.

The ‘Hear all the Glorious Music you Hear’ Award for best musical fail: Stacey (Mrs Simpson) for spinning the ratchet in percussion corner so hard that it flew across the stage nearly decapitating Max during Tommy’s Holiday Camp.

The ‘School Bully’ Award for violent behaviour: Shekinah – For losing the plot in Leeds when she discovered that she may not be able to have any meat in her diet that day.

The ‘You Lucky People’ Award for Safety Issues:  Kerry (Director) for driving the golf buggy into the wall during rehearsals.

The ‘Fiddle About’ Award for onstage antics:  Garry for breaking his whoopee cushion upon its very first use in Leeds.

The ‘Mask is Vital’ Award for unusual wardrobe activity: Alim (Frank)  for doing an impromptu catwalk strut in the bar in Nottingham on Press Night wearing Amelia’s heels and splitting his trousers right up the bum!

The ‘Come to my House’ Award for Accommodation Disasters: Adam for not getting digs for Nottingham, Leeds, Birmingham and Sheffield until the night before he arrived.

The ‘Sardines and an Egg’ Award for Culinary Activity:  Jeni Draper for her endless supply of delicious baked goods.

The ‘I Can’t Remember The Last Time We Went Out’ Award for Excessive Social Activity: Natasha Julien  for convincing herself that she had lost her bag after Press Night in Sheffield and cancelling her cards – only to then discover her handbag in the shoe cupboard.

The ‘I’m a Sensation’ Award for Onstage Antics: Max – for forgetting the gun in the shooting scene, creating GUNFINGER!

The ‘I’m a Sensation 2’ Award for Offstage Saves: Becky for covering the broken camera flash with a vocal ‘FLASH’!

The ‘Amazing Journey’ Award for mid show travel: Lukus (Cousin Kevin) for falling over…a lot. He was the only nominee in this category with 7 nominations! Congrats!

The ‘At My Favourite Table’ Award for Most Popular Member of the Company – A PUBLIC VOTE…and the Winner is …The Christmas Table!

All in all, a fab night was had by all… a great way to round up the tour!

Friday was luckily a free day to relax and recoup with Alim, Natasha Julien and Steve sitting down to a cheery afternoon of ‘Human Centipede 2’, lovely! Needless to say, I think Natasha was slightly traumatised by the experience. Emma (BSL Interpreter Extraordinaire) proved herself as a handy blog material wing woman, I thank you, and the whoopee cushion struck again this time claiming Julien and Shekinah as its next victims.  We rounded up our penultimate night with a delicious curry wonderfully sorted by lovely Peter (Acid Queen)… yum!

So, it was our very final day on Saturday where Alim led our final warm up set to various goodbye tunes and Peter did the physical warm up for the first time! That matinee was a hoot with a fab audience, a strange looking baby in the pram and Shekinah seeing herself treated with a cheeky mid show snack!  Alim also found himself having a quick change done by the ‘Village People’ (Kirsty and Julien) and after 5 months….Shekinah’s tummy was finally full as she failed to finish her between shows Wagamama! Never thought I’d see the day!  We completed the mid show madness with a round of ‘bottle in the bin’ where, on my first go I managed to kick the bottle across the room into the bin…..Premiere League watch out! We also learned the winners of the ‘Uber Fan’ Award -in third place was Rob Trigg (Amy’s Dad) with 16 visits, in second place were Anne and Nick Snowden (Anthony’s parents) and with a wapping 21 visits was Lori Trigg (Amy’s Mum). Thank you guys so much for being so wonderful and supportive…yay!

That evening we did our 78th and final performance of The Who’s Tommy and we went out with a bang.  A full standing ovation and a roaring crowd…what a way to end!  From there we packed up and convened at the theatre bar for a final fruit juice and said our goodbyes – let’s hope it won’t be for too long, eh?!

So there we have it, 5 weeks of rehearsals, 6 technical rehearsals, 6 dress rehearsals, a tonne of ice packs, too many chicken wings and a barrel full of joy…we Pinballed for one last time and laid Tommy down for a (hopefully short) rest!  Emotional it was and sensationally special it is.

Thank you so much for following our madness along the way, it has been an absolute joy to report the goings on from this truly special show.  Thank you to everyone that has supported us….and it’s with a slight tear in my eye that I say farewell for the last time from #TommyTour. Bye…Tash xx (aka The Hawker)