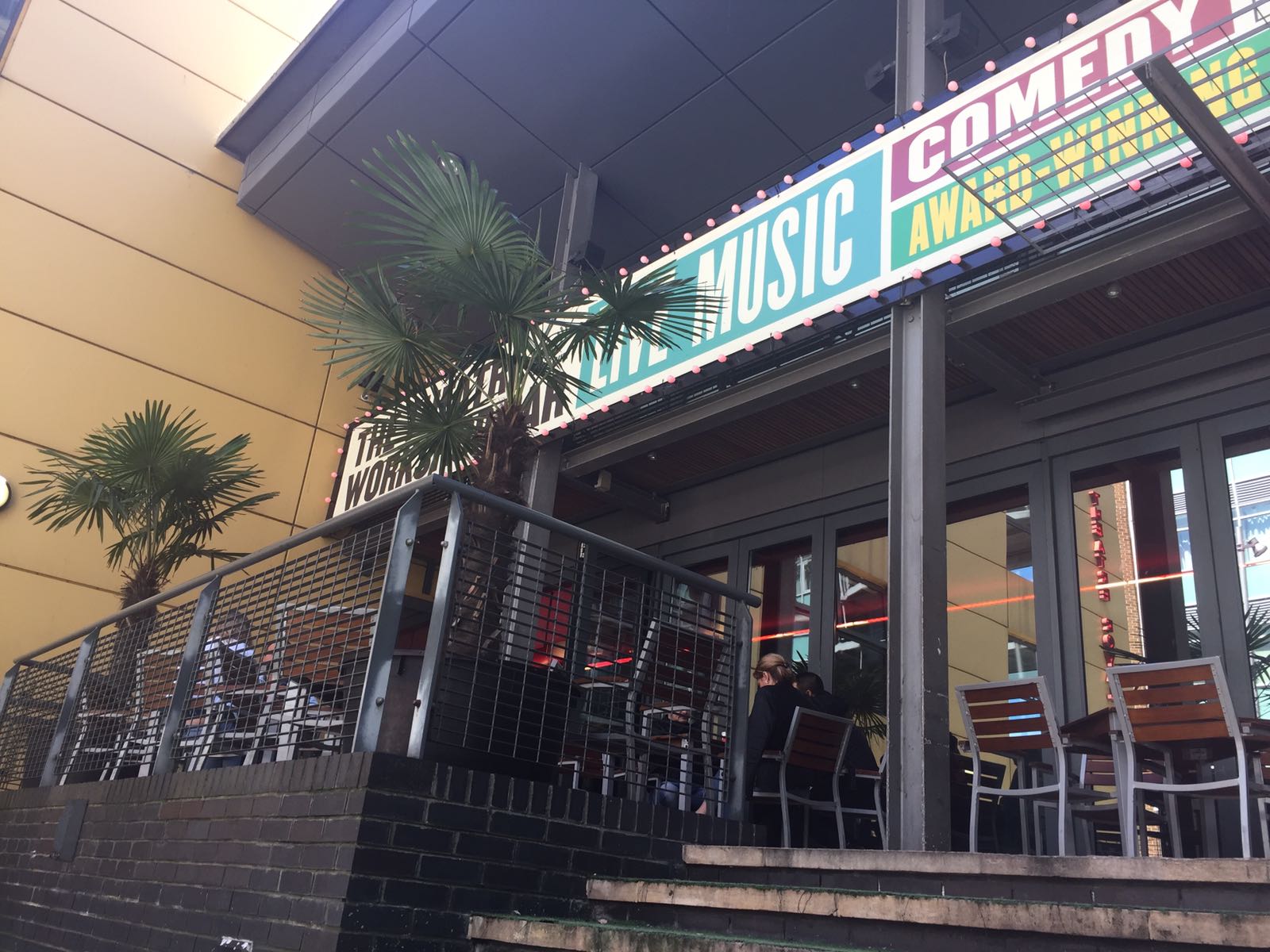 So the Tommy Tour gang found themselves considerably rested and refreshed after their blissful week off (as I for one certainly needed the batteries recharging), ready for our first week in London at the glorious Theatre Royal Stratford East.  For any this would be familiar territory but for those that had not been before there was something very important to introduce them to at this venue… the rake on the stage! At the best of times that thing will give you a good calf workout but when you have set pieces that are all on wheels – let the hilarity commence!  With this in mind however, we knew there was going to be much work to do and it was the perfect day to arrive at Gerry Raffles Square, the sun was beaming down on Joan Littlewood’s statue outside and the glorious scent of Caribbean cuisine wafted out of the restaurant… that is a very happy feeling!  I was of course off to strong start as I got into my Uber and headed halfway to Stratford with that ‘I’m missing something’ feeling – yes, your trombone!! Numpty! Cue: turn the car around and go and get it. Thankfully the driver had a sense of humour!

On Tuesday we were all reunited after the crew had already been in the day before jiggling stuff about to make it all look fab in what would be one of our tighter venues, and we were greeted with a huge bowl of fruit, flowers and a jar of chocolates in the dressing rooms… I like it here!  We of course did a big meet and greet in the auditorium led by our Mr Director, Kerry as we were now in his theatre.  He gave a very heart-warming speech as this will be his final show at Stratford East after being Artistic Director for 15 years and he couldn’t have put it more beautifully “Welcome to all of you, this is wonderful… all the people I love in one building… and Alim!”  It was also announced that Sarah Buick (TRSE Stage Manager) had managed to get  Tommy Pinball Machine for the bar for the duration of our run… but we do need 70 people to play it a day otherwise we lose money… get pinballing people!  Lukus (Cousin Kevin) also announced that (with his track record of negotiating vertical) he couldn’t wait to get on the raked stage!  Luckily fabulous BSL Queen Jeni Draper was on hand with another baking triumph in the form of nut free, gluten free chocolate and raspberry brownies to reassure him!

Following all of this excitement it was time to commence the technical rehearsal and time to address the elephant in the room… the rake! (I’ll stop banging on about it now I promise!)  It was particularly amusing though watching William (Tommy) trying to ride about on it with his tiny tricycle. But, as with everything, practice makes perfect!  In true Stratford tradition we were treated to dinner by the theatre headed by the fabulous Rita (Kerry’s Assistant) which today consisted of a hearty plate of bangers and mash, and it was so yum that Julian (Voice of Tommy) licked his plate!  Then the cheese plate arrived and I was one very happy Hawker… no Tash, you don’t have to eat it all!!  Post dinner we recommenced the tech and we’re treated to a montage of sassy poses on the stage from Mr Director (with that portfolio we’ll be seeing him on the cover of GQ soon no doubt!)

Wednesday rolled along and this was always going to be a mammoth session comprised of the rest of the tech, a dress rehearsal and opening preview.  We had made quite a few changes in the tech particularly in the wardrobe department where Kirsty and Connie (Team Wardrobe) did a grand job even though Donna (Nora) almost entered for ‘Do you think it’s alright’ wearing little more than her mic pack in the dress run.  I don’t think anyone would have minded much!  We did however plough into our first show in London that evening and it was outstanding – what an audience and the whole company were on top form giving us a fantastic evening all round with a cheeky full standing ovation to follow! Thank you Stratford, what a lovely response to our first night, where many of us call our home theatre.

Thursday’s matinee was slightly less angst even though the Pinball Machine tried to make a quick getaway down the stage during Cousin Kevin… thankfully Matthew (Voice of Tommy) was on hand to rescue it and I tried to play along to ’21’ with a rubber prop egg instead of the shaky one… #fail Thank goodness for the Caribbean Restaurant at the theatre where I managed to feed some sense into me in the form of Macaroni Cheese covered in Mutton Curry gravy… who knew??!! #revelation We were also treated to Matthew listing all the types of potato that he likes a la ‘Bubba’ Forrest Gump style!  Fascinating stuff!  Oh, and Shekinah (Voice of Nora) went for thirds proving that the girl can actually eat anything… so proud!  That evening we were joined again by Anthony’s lovely family who took over the Pinball machine in the bar giving Steve (Bass Guitarist) a run for his money… remember guys, we need you to play it 70 times a day so keep going!  Oh, and Alim (Frank) and Max (Captain Walker) coined the phrase ‘GunFinger’… I’ll just leave it at that!

Friday saw us coming in early for a few notes from our creatives where Kerry said to Donna “Can you be a bit cooler when you meet Captain Walker?  He’s sexy, but he’s not THAT sexy!” Don’t worry Max, others will disagree! He also asked Anthony (Rev Simpson) to calm down his dirty old man acting and hilariously asked Julian: “Can you get rid of the flat cap in Xmas?” Julian: “No! It’s a very nice cap” Kerry: “Well I’m sure if you talk to wardrobe they’ll let you buy it at the end of the run!” Fair.  Shekinah was also commended for her excellent manoeuvring of the Christmas Table during the previous evening’s show… who needs Chairgate when you can have Tablegate eh?!  This was all rounded off nicely by Julian falling into the set during the fight call and breaking a light bulb!  Alim and I joined forces on the scare cam front to get Julian… this backfired however as Julian was carrying a pint of water and threw it all over me in fright – thank goodness it wasn’t coffee!!  Alim then got me… the saga shall continue no doubt!

We had a touch tour for some of the blind and partially sighted members of the audience prior to the matinee on Saturday which was led by lovely Rosie (ASM) and Dressing Room 5 threw a surprise pre birthday party for Natasha Julien (Dancer)  in the room complete with party poppers and confetti balloons!  We had a bit longer to get ready for the show that afternoon as Cousin Kevin took one for the team, resulting in him having to hand out underwear during the reset of the second show and Hearns (Ensemble) managed to punch himself in the face during ‘We’re not gonna take it’ #irony The lads saw themselves heading down to the pub in between shows to watch England vs Scotland with Garry (Uncle Ernie) being particularly excited about this and all came back in a jolly old mood in time for our final performance of what had been a very long week.  It was fab and we all left the theatre on a real high.

Sunday was a day to collapse and recoup… and celebrate Natasha’s Birthday where she was given a mini tour of London by Steve before ending up on a boat on the Thames for a cheeky birthday fruit juice! Oh… and Shekinah had the world’s biggest dessert fail (I won’t go into too much detail as I think she’s still seething!)

So that’s it from me! Join me next week when we shall be reporting all the goings on from Week 2 in London and… the Press Night! Whoop!  Bye…Tash xx