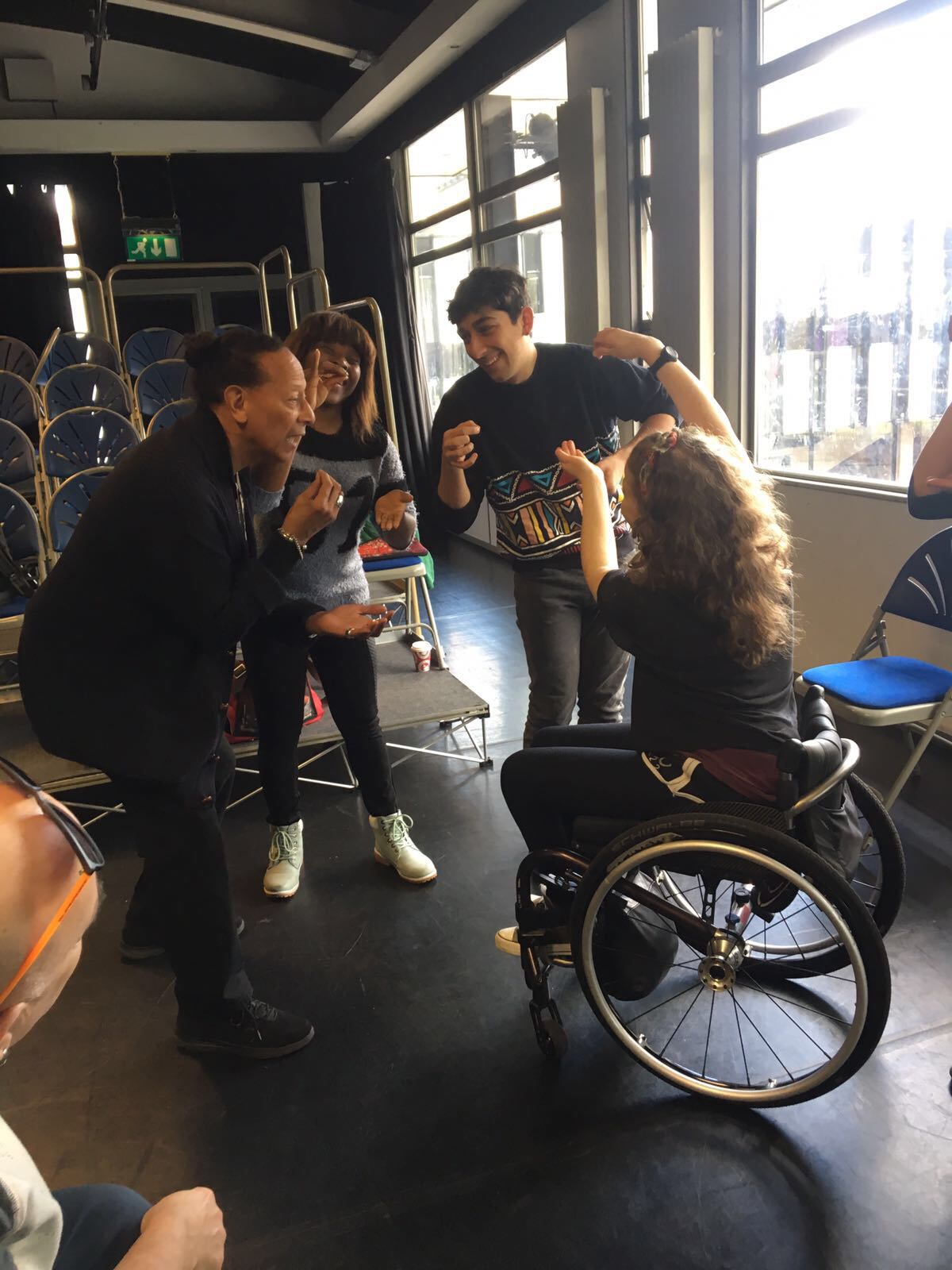 Week 2 at the Nottingham Playhouse people… seriously, where is the time going?  I’m just going to crack on as we’ve got plenty to cover and I need to cram it all in somehow!

Last weekend was a particularly social one and saw us reunited with former Graeae alumni, Roshni who came to visit us and make us all smile a lot! Lovely to see you sunshine! Sunday saw a Amy (Sally Simpson) and her lovely mum, Lori taking a trip to Wollaton Hall…”an Elizabethan country house of the 1580’s standing on a small but prominent hill in Wollaton Park, Nottingham”… thank you for the words Wikipedia! Their day was made even more special by the fact that they bumped into Alim (Frank) and Julian (Voice of Tommy) on their travels – a fab day had by all!  That evening Shekinah (Voice of Nora) and myself (Hawker) decided to inflict ourselves on our wonderful Company Manager, Patricia and her partner Michaela’s house for a spot of dinner – so very handy that they’re based here! Our dinner was fantastic, however this is where PD decided to demonstrate her culinary skills by experimenting with a can of ‘mock duck’ – or ‘muck’ as we cheekily abbreviated it – it did look like cat food but surprising to say, it was actually pretty good! Who’d have known?!

Monday saw our Tommy Tourists Alim, Julian and William (Tommy) on an outing to Alton Towers where the first ride they discovered was the ‘Spinball Whizzer’, it’s like they knew they were coming!  Meanwhile Lukus (Cousin Kevin), Stacey (Mrs Simpson) and Amy had planned to visit the castle but it sadly began to rain so instead they went for some yummy Thai food… then they went for cake… then they went for dinner… who said culture day couldn’t be fun?!

So Tuesday we were back at the Playhouse after two glorious days off, but not before myself and Stacey had raided all of the charity shops in Nottingham resulting in us having plenty more luggage to take home at the end of the week.  One fabulous Vintage Outlet that we did discover was Wild Clothing which is set on two floors with the staff communicating to each other via walkie talkie. We did giggle when the downstairs one buzzed and we heard the lady say “I’ve got two things to say – the first is that it’s your turn to sort the music, the second is it’s snowing so better stick the Xmas CD on!”  Brilliant! (FYI – it actually was snowing… in April!)

Back at theatre we were introduced to the lovely Simon, our Sound No 2 Dep who had popped along for the week so that Nathan (Sound No 2) could shadow lovely Callum (Sound No 1) should he ever be ill or too lazy to do the show.  In other news Shekinah went all out with her shades of lipstick for her 3 second crossover during ‘Eyesight to the Blind/Bling’….I certainly appreciate the sentiment and though I can’t see you behind me, I know it’s happening and it makes me smile!

That evening fabulous Giles (Stage Management & Harmonica extraordinaire) and Ali’s (DSM) landlord and landlady popped along to see the show.  Naturally Giles rushed home to see if they’d had a good time, sadly he’d forgotten his keys and managed to set off the alarm in a particularly posh neighbourhood whilst lurking about outside in his show blacks – not suspect at all! Sadly for him his peeps were in the theatre bar enjoying a cheeky Sauvignon!!

Wednesday was the second Career Development Workshop of the tour, this one being run by Nottingham Playhouse’s own Fiona Buffini who shall be directing the 2018 Ramps on the Moon production.  This afternoon was filled with exercises in forum theatre and all in all seemed to be a very fun and productive one – well done team! This was followed by an impromptu little jam session in the green room with Steve (Winston Churchill) on banjo and Dave Gardner (LX) on guitar… lovely stuff!  Meanwhile naughty Max (Captain Walker) disclosed that “I’ve done something really mean to Rob (MD), I’ve taken the dressing room key and I’ve just been sitting here in the green room with it”… little bugger, poor Rob… I hear he went searching high and low for that!  On a joyous note however, we did learn that gorgeous Mr P (Production Manager) did at one time tread the boards himself in a former Nottingham Playhouse Cod Panto ‘Beauty and the Beast’!! I seriously wish I had seen that!

That evening saw Alim really giving his all but in doing so sustaining a pretty sore bump to the head poor thing. Luckily he was consoled by lots of cuddles and a vat of creme eggs!  Amelia (Specialist’s Assistant) was on hand to offer some of her vegan ‘Tofurkey’ but Alim was plenty busy his egg collection so she ate it herself! Oh, and Peter (Acid Queen) announced that there are only ten Peter Straker’s in the UK. He is planning a Peter Straker convention for later this year, and any (but only) Peter Straker can come, not just the UK ones! Good to know!  Post show, a few of us descended upon the casino…again. What??? It does good food!! Ask Stacey, she had a 2 for 1 voucher for food so ordered herself a steak and half a chicken. Winning!!

Thursday was a big day starting with our awesome Garry (Uncle Ernie, Shekinah and Peter doing a sexy little interview for ITV on the stage and they did a marvellous job!  While this was occurring poor old Steve was battling with the elevator in his digs which kept refusing to spurt him out on the correct floor. This went on for 20 minutes… Just take the stairs mate!!

The matinee was our Relaxed Performance which was hosted beautifully by Garry and we all had a fab time, especially Max who gave us a gorgeous lone string guitar solo during ‘Sally Simpson’… keeping it fresh!  Oh, and during our lunch break handsome Giles kindly gave Ailsa (Amelia’s PA) a cheeky little harmonica lesson and it was sounding pretty darn good I’ve got to say! This was while Patricia was chomping on her mackerel and rice and spitting it all over me and the table while stating “Don’t eat with food in your mouth”… methinks somebody was tired!!  She was probably exasperated by the ‘Phantom Dressing Room Photo Mover’ striking again resulting in her getting on the tannoy to have a go about it “those photos are property of Patricia Davenport. Put them back or I won’t be responsible for what happens to your dressing rooms when we get to Leeds” Noted…and FYI, it wasn’t me! I just moved her picture after said glorious speech – someone had to!!

During the evening show Amy had a Tic Tac disaster which saw her having to go cold turkey for the whole of Act 2… tough times!  Thank goodness we had a great release post show in the form of a fantastic Irish Folk Night with Garry’s mates ‘Kelly’s Heroes’ where we all jammed along together, Peter demonstrated some pretty radical Irish dancing and even instigated a hilarious limbo competition where Matthew (Voice of Tommy’ and Natasha J (Dancer) proved their hidden talents!  Nobody could take away from Irishman Julian however, who certainly did his native dancing proud!  We also saw the return of Anthony’s (Rev Simpson) lovely parents who bought Drummer Adam a flat cap to bring out his inner Yorkshireman. That’ll be handy when we get to Leeds! What a sweetie!! Of course we ended up in the casino… the food is really good but poor Matthew was baffled by the sport on the TV exclaiming “how are people playing football this late at night??”…err, that’ll be the Match of the Day Highlights babe… even I know that!!!

Friday saw the return of our fab Director for Change, Michele Taylor where we had a pretty constructive afternoon of evaluations so far.  So great that we can sit and discuss the process as it is a learning curve and we all want to make ‘Ramps’ great… thanks Michele! This was followed by a very over excited Becky (Newspaper Vendor) during warm up with Patricia commenting “somebody give her another Duracell!” And Rob stating “I had another thought but I can’t find it” Again ‘ever helpful’ Patricia was on hand to help  with “Would you like me to put a call out?!”  Thank goodness she’s here!  Sadly Friday was also lovely Caz’s (BSL Interpreter) last day with us so we sent her off with a massive company hug… nice bunch!  (And the sweatiest cuddle ever from Adam immediately after the show). However, Alim did manage to get his Dance Captain notebook stuck together with Super Glue by someone… rascals everywhere!  Probably wasn’t Amy though, she was too busy chucking water all over herself in her surgical scrubs prior to ‘Go to the Mirror’… doh!

So Saturday rolled around and for the first time ever, we didn’t have a matinee so we made Shekinah cook for us instead and it was EPIC… so much so that Julian fell over at the sight of all the food and Alim dropped his phone!  While we were stuffing ourselves silly Adam was giving Amelia a cheeky little drum lesson which she paid him for with a bag of doughnuts, and we were sent into our final Nottingham show with a lovely goodbye from Nottingham’s Artistic Director Giles. Thank you for having us, we’ve had a blast! And that evening’s show didn’t disappoint with an electric atmosphere and a full standing ovation at the end! (Even after Uncle Ernie’s serious negotiations with the blooming golf buggy!)

So I won’t miss the very ungenerous dressing room mirrors but I shall miss everything else. Thank you Nottingham, we’ve had a great time as always!  Join me next week when we shall be wreaking havoc in Leeds… watch out West Yorkshire Playhouse… you’re next! Bye…Tash xx