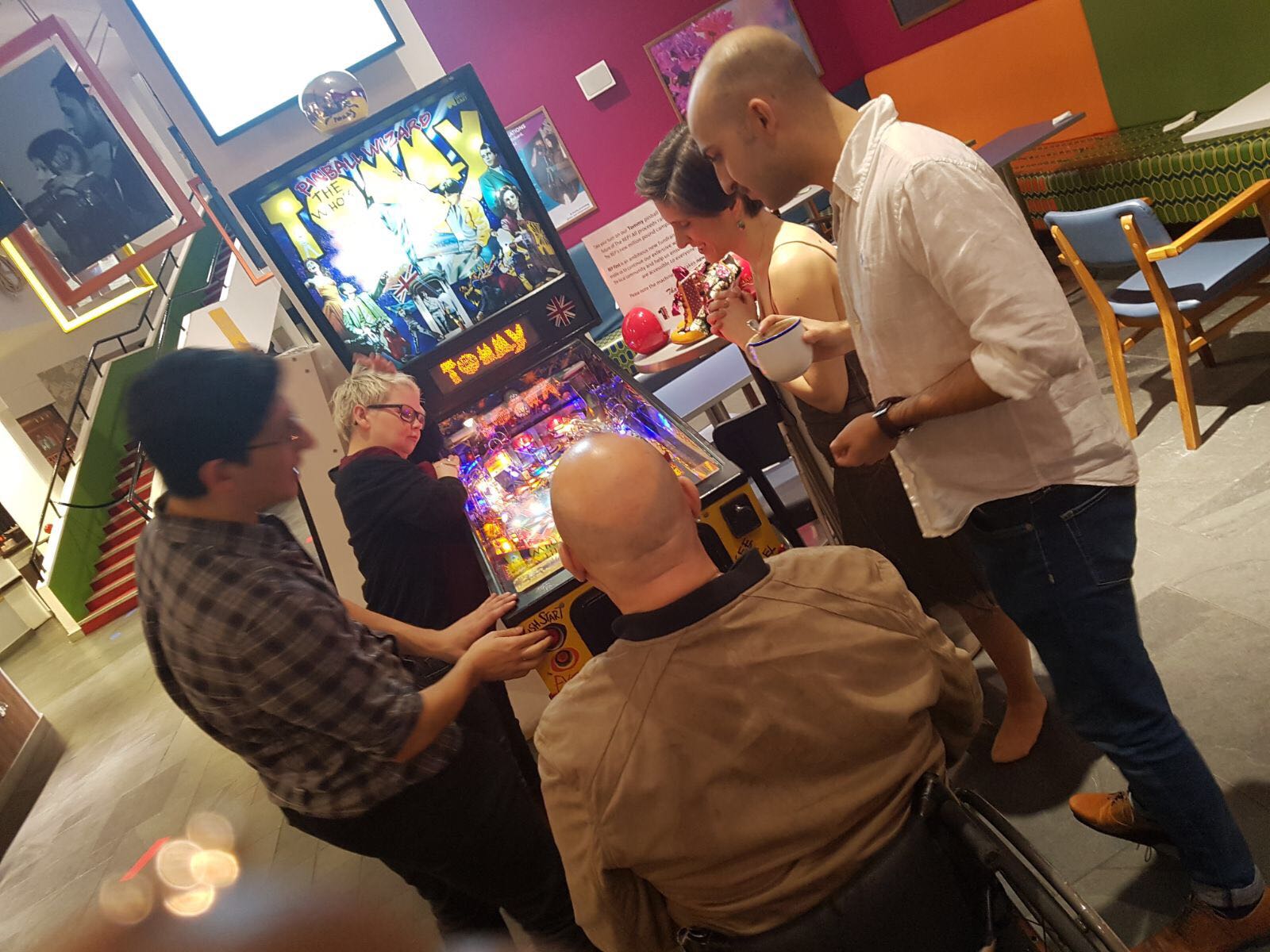 Watch out everyone, we’ve hit the Midlands again – and this time it’s in the wonderful city of Birmingham! Definitely one of my faves! The Rep Theatre definitely feels like home we were a pretty excited bunch once we all arrived and got ourselves settled in.  This was not before our legendary crew headed by handsome Mr P (Production Manager) finished the get out in Leeds at 4am on Sunday morning and got themselves and all our stuff (set, costumes, instruments, lights, sound kit & Peter Straker’s suitcase) to Sunny Brum later that day. You are absolute stars, we salute you!

While our awesome crew were putting everything together in the Rep on Monday a few of us got together to enjoy a cheeky cocktail by the canal.  This is where we learned that Steve (Winston Churchill) and Pickles (Garry’s PA) learned that they both got their first ever stage jobs from open auditions for the West End Production of Oliver as child actors… although not at the same time with Pix doing it in 1977 at the Albery Theatre and Steve doing the Palladium in 1994… small world!

Tuesday rolled around and the #TommyTour company found themselves on the epic stage of the Birmingham Rep ready to do a meet and greet led by lovely Chief Exec Stuart Rogers and it was fab to see so many friendly faces.

FYI the Rep stage is the second largest in the UK, which means there is plenty of room for all our flight cases at the back. So once we had said a big ‘hello’ and ‘how are you’ to our Brum my family it was time to tackle the technical rehearsal which was pretty seamless even though Matthew (voice of Tommy) got busted with photographic evidence for drawing the chalk outline of the dead body in the shape of my bum. Thank you Tom (team LX) for capturing the moment so beautifully. While all of this was going on Shekinah (voice of Nora) arrived with six new bold and beautiful lipstick for her ‘Hawker’ cross and Donna (Nora) struggled to find her dressing room as someone (couldn’t think who) had moved her picture to the toilet door.. But the most exciting news of the day was that for the first time on the tour we had Ali (DSM) calling the show from the wings so now we can touch her anytime we want… yay!

Wednesday saw us doing a pretty slick dress rehearsal which was of course followed by notes with Nicki (associate director) who complimented Steve with “brilliant Winston Churchill I actually thought it was John Lithgow on the stage” and stated to the rest of us “I need to see the fake smiles, the ‘I work in the Disney store’ smiles” … referring to Tommy’s holiday camp. Meanwhile, her one note for William (Tommy) was “leg hair!” So dinner time soon rolled around and Shekinah took the opportunity to suitably terrify William by sharing an asset or two with the poor lad… In other news we opened the show in Birmingham that night and were greeted with a lovely full standing ovation even though Lukus (Cousin Kevin) managed to lock William in his dressing room during the half hour call #toughdayforTommy. We all piled into Marmalade, the theatre bar afterwards and were treated to a cheeky glass of pop from the lovely Stuart and greeted by two of our favourites from Ipswich, Sarah and Lorna (Chief Exec and General Manager) who had popped along to say hello. Amidst all of the celebrations, Julian (Voice of Tommy) spent a good while thinking the bush in the plant pot outside the Rep was our company manager Patricia… it was not. It was just a bush. Me thinks the boy had taken too many cold and flu tablets that day.

Thursday saw myself (Hawker) and Peter (Acid queen) trotting along to BBC West Midlands for a chirpy little radio interview with Paul Franks, who provided Peter with a photograph of him with Freddie Mercury and Elton John from the eighties… handsome beggar! Following that it was time for more ‘Notes with Nicki’ where she told Shekinah and Alim (Frank) to “check your sex position” and again to Alim and Gary (uncle Ernie) during ‘Pass it on’ I think I managed to get about of two litres of milk out of that last night” #milkingit.  That evening saw us doing our Press Night performance and it was a pretty electric one with a great audience and the return of our handsome Mr Director, Kerry Michael. We were treated to another standing ovation probably because we had our lovely Mr P (Production Manager) operating the captions and more spectacular ‘dead body chalk work’ from Matthew this time in the form of Mr Greedy… hopefully by the end of the run we should get through all of the Mr Men. The show was followed by a wonderful party hosted by the Rep complete with our very own Tommy pinball machine in the foyer which has an inbuilt leader board to encourage some healthy competition. Naturally the whole company got involved but ultimately the winner was… Amelia (specialist’s assistant) who seems to be a pinball wizard natural.

And then there was Friday… The Who’s Pete Townsend’s birthday! Happy birthday Pete, hope you had a good one! It was the day for our Birmingham ‘CPD’ workshop with lovely Tessa and Roxana Silbert which was really useful and we all had a pretty cool afternoon. Meanwhile Natasha Julien (dancer) entered the theatre with a very big bag. I said “what’s in your bag?” She said “food, lots of healthy food”… I then pulled out a big bag of doritos from the top.. Cool original flavour no less… good choice. #thehealthyoption.

So we all set off for warm up and once it was over, Garry turned up. Patricia asked him “have you just got in?” Garry replied in his most innocent voice “I’m sorry Patricia, I fell asleep!” FYI, it was 6pm and he lives it the flat upstairs. It was an eventful show that evening, where Shekinah literally cried over spilled chocolate balls following her impromptu solo during the opening number, Hearns (ensemble) did his bow and then ran into the wall and I struggled to find the words… thank goodness for the captions!! Meanwhile Rosie (ASM) shadowed Ali so we had the lovely new face of Maddie doing Rosie and they all did a fabulous job… well done everyone. To celebrate, a fair few of the company ended up in Celebrity curry house for a cheeky bit of grub where Peter somehow managed to blag a free meal and Shekinah and Adam had a sexy ‘after eight down the face race’ to complete the evening. Steve and I were then treated to an awesome Uber driver who used to live with Pete Townsend’s niece while they were at uni… wow the world is small.

Saturday was a big day for lovely Anthony as his beloved Bradford FC were at Wembley playing against Millwall in the league one play off final. As there was no matinee the lad trotted off to Broad Street to watch it on the big screen with Garry, Steve, Stacey, Kevin, Pickles, and Nathan (sound number two) to support. Alas Millwall scored in the eighty fifth minute with a dubious off side decision, ‘seen them given’. Anthony was sad so we all hugged him a lot. Better luck next year babe. In happier news Kirsty (wardrobe mistress) Max (Captain Walker) Adam and Rob (MD) went to see the NT show ‘My Country’ in the studio at the Rep, and Shekinah, Amelia and I went to the Bullring to get our nails and eyebrows sorted out. During the show that night, my trombone had an interesting time in the prologue while William lost his shoe between the Acid Queen’s legs… luckily Kirsty was nearby to rectify the situation and all was well.

The week was rounded off by a well-deserved day of rest, which saw Stacey (Mrs Simpson) heading off the Wembley herself to support South Shields against Cleethorpes in the FA Vase final, and Alim decided that Connie (team wardrobe) looks like a Disney princess. He said “if a blue bird flew in and landed on your shoulder I would not be surprised” Connie replied with “I would!”

So that’s it from me for this week. Join me next week when we shall no doubt have plenty more hilarity to report from our final week at the wonderful Birmingham Rep… Let’s hope the sun stays out. Bye…Tash xx

One thought on “The #TommyTour Diaries Week Thirteen”