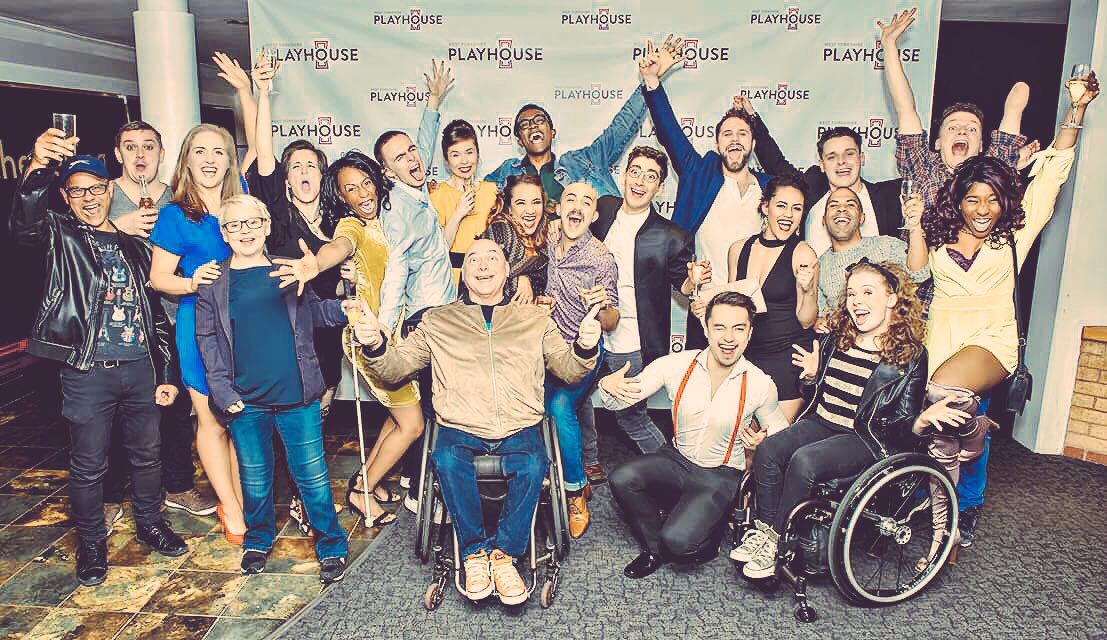 So it was our second week in sunny Leeds at the West Yorkshire Playhouse and boy was it a busy one, what with it being a Monday – Saturday kind of week and all!  Thankfully for us, glorious sunshine followed us about and we cracked on in our cheery Tommy kind of way!

The show was proving to be a great hit up North too so we were all in good spirits. Especially seeing as Shekinah (Voice of Nora) decided to kick Monday off by treating Natasha J (Dancer), Donna (Nora) and myself (Hawker) to a lovely facial. She then went on to do Amy (Sally Simpson) later in the week… methinks somebody should open up a salon, it was that good!  While the ladies were doing nice ‘pampery’ stuff, Max (Captain Walker), Garry (Uncle Ernie) and Pickles (Garry’s PA) invested in a couple of whoopee cushions and were seen creating endless joy for themselves with them… even though Garry broke his the first time he sat on it!  I then saw this as a fun opportunity to have some mischief with the Acid Queen, Peter Straker who, of course, knew I was up to something but humoured me anyway… and while I did get him to sit on it, he found my hysterical reaction to it far funnier. Good sport! The show that night was another hit and we were greeted to a Monday night ovation, which was lovely as Anthony’s lovely parents were back in for their 4th show in a row… it’s nice when the lad comes near home eh?!  Anthony’s dad was also recruiting a little club of flat cap wearers adding me to his list with a pink one and Alim (Frank) too.  Thank you so much, you guys are legends!  It was also nice to see the return of our Director, Kerry who bowled up in Leeds to say hello and buy us all a tea and biscuit afterwards.  Later that evening most of the company crept off to bed to conserve for the coming week… however, I have it on good authority that Patricia (Company Manager), Dave G (LX) & Peter went home via Queens Court and ended up having a cheeky little Monday night boogie with the DJ from last week while he was doing his Sensational Drag Act!

It was lovely to have our daytime free again on Tuesday giving most some time to relax and enjoy some rays.  Patricia and her partner Michaela certainly made the most of it and ended up at SaltAir Mills for a David Hockney Exhibition (look how cultured we lot can be innit!) Later that day saw the boys posting a brilliantly funny video of the boys bullying Ali (DSM) for her ‘aggressive’ nature on the tannoy – just to clarify; Ali is the most gentle natured, polite tannoy announcer on the planet.  She now can’t do them without stifling a little giggle… lovely!  Tuesday was also the day for our Leeds Post Show Discussion led by WYP’s Amy Leach and we had a great turnout and some wonderful feedback and raised some really valid points. In particular, we saw Amelia (Specialist’s Assistant), who is blind, explaining that often people view disabled people as ‘Super Humans’ which are often perceived as a type of ‘Inspirational Porn’… she wryly quipped “It’s funny because, I’ve never been able to walk into a library with a beaming attitude and suddenly been able to read all the books”… boom!!! I find these sessions a great springboard for people to openly ask questions and have frank discussions about diversity not just in the Arts, but also in our worlds.  On a silly note, beautiful Connie (Team Wardrobe) went to a bar and managed to drop her wallet in the loo… fail!

So Wednesday was drama day!  That’s right, it was time for the CPD Workshop led by WYP’s Amy Leach again where Team Tommy saw themselves doing some super fun ‘R & D’ (Research and Development) with a piece of text from ‘Arabian Nights’.  A great afternoon was had and everyone emerged smiling, that’s always a good sign.  In other news, Steve (Winston Churchill) woke up to a little morning time gift from Max in the form of a Berocca tablet with a post it attached reading: “Breakfast is Served”!  This is probably due to the fact that they were sat up that evening singing Christian Rock Tunes!  The Who would be proud!  Later that day, in preparation for our mid-week show, Kirsty (Wardrobe Mistress) came to do my hair and left stating “Gotta go, things to see and people to do!”  Errm….!  With that in mind, we launched into that evening’s performance where William (Tommy) was enjoying Pinball Wizard so much, he stayed a little longer than normal, this is probably because Lukus (Cousin Kevin) had given him a bit more aggression than he had bargained for during ‘Cousin Kevin’!  Oh, and Amelia gave us a gorgeous little one beat solo on her Accordion during ‘Tommy’s Holiday Camp’… thank you for the music!  We also learned that evening, back at the ranch that lovely Julian (Voice of Tommy) has an inability to control an ice tray from the freezer…

By the time Thursday rolled around it was time for our Leeds Relaxed Performance again led beautifully by Garry and signed by the fab Susan Booth.  It was a brilliant show and we all had lots of fun and made a few pals at the end too.  However, this was where Shekinah announced that her hunger cramp had spread to her neck – somebody feed her quick! And Alim (Frank) managed to tread on Lukus, causing him to let out a little yelp and stack it before the family photo in Act 2 (Err aren’t you the Dance Captain??) Following the matinee, Shekinah and Donna (Nora) then proceeded to wander through Leeds City Centre wearing their animal onesies and glamorous shades and William was caught on camera trying to squeeze himself into his mini dressing room cupboard during the interval of the evening show… he managed it as well!  The post show activity for Thursday however was my favourite of the fortnight – a ‘Sensational’ company meal at the fabulous ‘Akbar’s’ Indian Restaurant on Eastgate where they are particularly famous for their gigantic family naan breads.  Of course we took full advantage of this and, Dressing Room 4 in particular seemed to order ALL the food… a very happy ‘Tommy Camp’ we were!  Although, Hearns (Ensemble) did find his dish slightly spicy so Shekinah and Ali advised him, very sensibly I might add, to have it with some yoghurt. Donna went on to tip all of the minty yoghurt into his food forcing him to say “Now it tastes like shampoo”… Soz Hearns… he still enjoyed it and we fed him some extra poppadums to keep him happy! While this was going on, Patricia was super busy stealing all of the lollipops from the bill tray… No wonder she’s always so bouncy!

Friday saw us coming in to do a music and choreography ‘clean up’ call where Matthew demonstrated some particularly sassy ‘Sensation’ hip motions – watch out people – post watershed methinks!  Following that, mischievous Donna watched Lukus get into the lift, so she ran to the next floor and punched the button, Lukus stepped out just as she jumped out at him which saw the poor lad scream himself into a fabulous backbend… needless to say, this kept Donna gigging for some time.  There was more ‘LiftGate’ to come which saw Alim & Garry vs Team Wardrobe as they tried to fight for who was going to get in first… it’s Week 6 of the tour and this is what we’ve resorted to!

So Saturday, our final day at the West Yorkshire Playhouse, saw Amy getting slightly delirious in the wings as she and Connie tried to play a gag on Stacey (Mrs Simpson) backstage and Lukus pinging his braces off as he tried to do some risqué dancing against the pinball machine in the wings!  However, by the end of the evening performance we were given a full standing ovation leaving us to exit the Playhouse on a true high.  So we all packed up our things and allowed our wonderful crew to get on with the ‘get out’ and headed to the Wardrobe Bar next door where we tried a particularly complicated method of table negotiation leaving Garry to say: “What are you trying to do, build a ship?!” Brilliantly put!

And so it was on Sunday that most us came to bid farewell to The North and head on down to our next venue… but not before Steve and I went to collect Shekinah and Natasha J from their digs only to learn that Shekinah had shut the door with her handbag inside… and her digs keys… uh oh!! This saw Steve turn a strange shade of green as he was going to miss the beginning of his beloved West Ham vs Liverpool and poor old Shaks trying to resolve this situ… Naturally Tash and Tash sat and documented the whole event! Thankfully the cleaner rocked up to let her in and we sang Michael Jackson, Divine Comedy and the Indiana theme tune all the way to Birmingham!  In other travel related drama, Pickles and Garry found themselves on a particularly crowded train, so Pickles decided to pay for an upgrade which saw him move from standing in the middle of the carriage to sitting on the floor outside the toilet, lush!  There was then an announcement stating that, due to overcrowding Cross Country rail were going to add another carriage at Birmingham. Pickles almost decided to stay on until Plymouth just so he could have a seat! Poor love!

So that’s it from Leeds I’m afraid but it has been fun, thank you West Yorkshire Playhouse!  Join me next week when we get all the goss from our opening week at the amazing Birmingham Rep! Bye… Tash xx